When It Rained at Hembry Castle

Named a Best Historical Novel of 2016 by IndieReader

For fans of Downton Abbey.

A lush historical novel set in Victorian England, When It Rained at Hembry Castle is the story of an aristocratic family, secrets that dare not be told, and the wonder of falling in love.

When the 8th Earl of Staton dies, his eldest son, the unreliable Richard, inherits the title and the family’s home—Hembry Castle. The Earl’s niece, the American-born Daphne, is intrigued by Edward Ellis, a rising author with first-hand knowledge of Hembry Castle—from the servants’ hall. Can Richard come to terms with his title before bringing ruin on his family? Will Edward and Daphne find their way to each other despite the obstacles of life at Hembry Castle?

When It Rained at Hembry Castle is a page-turning, romantic novel with vivid characters and an engrossing story that will keep you guessing until the end.

It’s 1917, in the midst of World War I, and Rose Scofield knows exactly what she’ll do for women suffrage. She’ll fight with her very life to make women suffrage a reality.

A headstrong young woman who yearns to be herself in a time when women weren’t free, Rose comes of age when world wars are new and automobiles, moving pictures, and airplanes are marvels of technology. She falls in love with Adam Bell, a vaudeville actor who travels the country with his brothers gathering laughs and hard knocks, though she denies her feelings for him, fearing he could prove to be her weakness. While working in Washington, D.C. for votes for women, Rose is arrested for her suffragist activities. After her release she must come to terms with her dreams for the future.

Victory Garden is a reminder of how far we’ve come…and how far we still have to go.

Woman of Stones: A Novella

For fans of The Red Tent.

She is from a poor Jewish settlement in a powerful Greco-Roman world. When Othniel bar-Ismael, a textile merchant from Jerusalem, arrives in her village, he is determined to take her for his wife. But the reality of living as a fine lady is not as grand as she thought it would be. When she meets the man of her dreams, an acquaintance of her husband’s, her life is forever changed. In the end, she must make sense of the second chance she has been granted.

James Wentworth has a secret. He lives quietly in Salem, Massachusetts making few ties with anyone. One night his private world is turned upside down when he meets Sarah Alexander, a dead ringer for his wife, Elizabeth. Though it has been years since Elizabeth’s death, James cannot bring himself to move on.

Sarah also has a secret. She is haunted by nightmares, and every night she is awakened by visions of hangings, being arrested, and dying in jail–scenes from the Salem Witch Trials in 1692. As James comes to terms with his feelings for Sarah, he must also dodge accusations from a reporter desperate to prove that James is not who, or what, he seems to be. Soon James and Sarah discover a mystery that may bind them in ways they never imagined. Will James make the ultimate sacrifice to prevent a new hunt from bringing hysteria to Salem again? 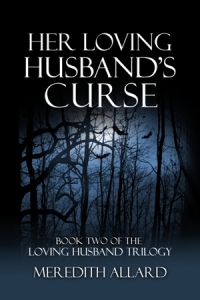 After many long and lonely years, James Wentworth’s life is falling into place. With his wife, Sarah, the only woman he has ever loved, he has found the meaning behind her nightmares about the Salem Witch Trials, and now they are rebuilding the life they began together so long ago.

But the past is never far away for the Wentworths. While Sarah is haunted by new visions, now about the baby she carried over three hundred years before, James is confronted with painful memories about his time with the Cherokee on the Trail of Tears. Through it all, the persistent reporter Kenneth Hempel reappears, still determined to prove that the undead walk the earth. If Hempel succeeds in his quest, James and Sarah will suffer. Will the curse of the vampire prevent James and Sarah from living their happily ever after?

James Wentworth’s secret is no longer a secret, and now he and his beloved wife, Sarah, have been separated. While suffering his own internment, James is reminded of his time with Japanese-Americans in the Manzanar Relocation Camp during World War II, and he cannot allow the past to repeat itself. With the help of his friends—Chandresh, Jocelyn, Timothy, even the irreverent Geoffrey—James learns what it means to return, and he is determined to return to his Sarah no matter the challenges—or the consequences. In the end, it may be up to Olivia, the most powerful of witches, to grant James’s most fervent wish. Will James and Sarah be reunited once and for all despite the madness surrounding them?

History Will Be Kind: An Anthology of Historical Fiction